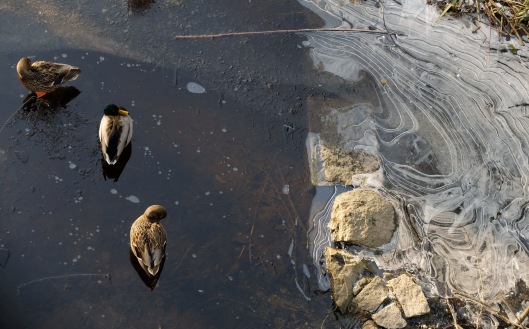 Come back in the summer.

Out on the Stanley Park Seawall.  About as far west as the seawall gets.

Saturday, December 24, 2016.  A lifeguard ready and equipped to rescue anyone who takes to the ice on Lost Lagoon.

I’ve often criticized the shamefully inadequate bikeway system in our crown jewel (“The Shame of Stanley Park”), but really, the problem with the design of the internal transportation network goes way beyond bikes.

Sometime in the post-war period (I’m guessing in the 1950s), the planners and engineers of the day assumed the default way of moving through the park would be by car – and they designed accordingly.

There is of course the seawall and trail system.  But in the heavily used interior parts on the east side of the park, there are only some unhappy asphalt paths where it is assumed that walkers, runners and cyclists will stick to the spaces allocated to them, inadequate as they are, and not try to walk along or run along the parkways designed to be exclusively for cars.

Below is where the city meets the park.  The design is clear: there are no complete streets to accommodate multiple users. If you are walking, you go on only the separate paths, regardless of whether they actually go where you want.

And the quality of the ped routes – the minimum amount of asphalt – also makes it clear where you come in the hierarchy.

Regular users know how frustrating it can be to cross the park south of Lost Lagoon:

Cyclists heading for the tennis courts from the north along Lagoon Drive, for instance, are confronted with a one-way road system that makes no accommodation for their intentions.  You want to go left, but legally you can’t.  It’s assumed that, like drivers, you will go kilometres out of your way to reach your destination – or else use the ped paths to the annoyance of walkers.

Again, another sign that the Park Board (a) is oblivious, (b) doesn’t care or (c) isn’t prepared to make an active transportation system for everyone a priority.

People love to be outside, enjoying themselves, and finding places to walk, ride, sit — whatever is available to them.

Just a guy, out for a ride.  And a photog who likes the image.

Over four-fifths of likely voters (83 percent) believe that bicycling is good for San Francisco, and that bicycling in the city should be comfortable and attractive to everyone from small children to seniors.

The poll was conducted by David Binder Research, surveying 402 likely voters by cell phone and land line between Saturday, Aug. 20 and Tuesday, Aug. 23, and was commissioned by the San Francisco Bicycle Coalition. The margin of error is 4.9 percent. Findings include: …

PT: As a past NPA City Councillor, I continue to be amazed that the party has not tried to reposition itself on cycling issues, still aligning itself with whatever group is currently pissed off and dog-whistling to voters that cycling will not be a priority.

That’s most evident with the Park Board on which the NPA holds a majority.  Some of the most controversial projects fall in their jurisdiction – notably Kits Park.  But their indifference extends to other parks that are on the cycling network or are major destinations – especially Jericho and Stanley Parks.  There has been no upgrading of the cycling infrastructure in years – and no indication that there will be any time soon.

The most egregious example: Second Beach in Stanley Park, a major junction for the thousands of cyclists and pedestrians who are deliberately placed in conflict:

The worst case is  the point where the yellow line switches from being a centre line for cyclists to a separation indicator for peds and bikes, without any clear indication of what’s happening.  It’s been this way for years – and apparently no one at Parks cares very much. 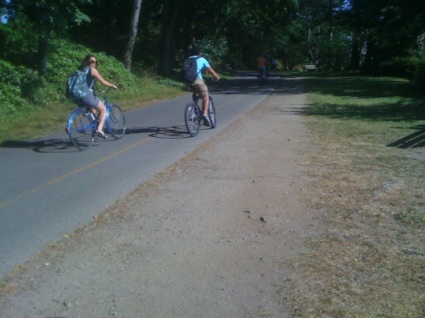 And then, of course, there’s this at the entrance to Jericho: 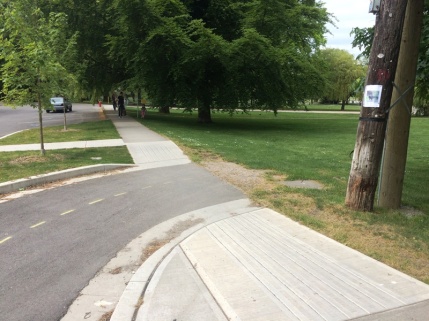 The Park Board couldn’t make a stronger statement, could it?

Ask a representative about their approach, and you’ll here about studies and plans and consultations.  But it’s also clear that there will be no political leadership, and that there is unlikely to be any action, much less a major commitment of resources, any time soon.

Which is odd.  Given the explosive growth in active transportation and the clear benefits, politicians today generally want to align themselves with this movement.  But more than, why would the Park Board continue to maintain an unacceptable status quo as the quality of infrastructure is upgraded all around them?  Their failure to address deficiencies and outstanding conflicts will only become more apparent – and annoying.

Sure, it won’t be easy to deal with unhappy constituents who see paving parkland as an unacceptable and unnecessary intrusion (regardless of the success of the Seaside route through English Bay and the False Creek parks).  But the NPA prides itself on the party that can get things done, and do it in a more balanced way than Vision.

And yet their indifference on this file only illustrates the opposite.

Sunday in Stanley Park.  And Mobi has obviously become a part of the landscape, the mindset, the scene. Especially this lovely scene, beneath a tree slipping gracefully into autumn colours.

Out on a windy, quasi-autumnal Sunday afternoon. A lovely, lively place. 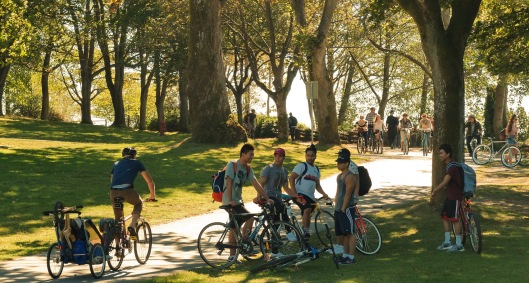