We are visiting Salamanca, Spain and I couldn’t help admiring the clear demarcation of the bike and walking paths here. So much better than Vancouver’s oh-so-subtle signage mounted about 4 meters high on sign posts or via the occasional glyph on the pathway. 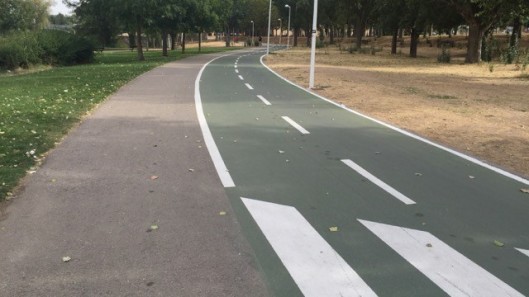 We live in Coal Harbour and watch the chaos as tourists take the wrong turn along the seawall – either as cyclists on the walking path or stroll down the bike path. It’s mayhem and for the most part, it’s because it’s not easy to figure out where you are supposed to be unless you live in Vancouver and know the secret handshake.

I don’t know the population of Salamanca but it’s nowhere close to Vancouver.  So why can’t we do something smart like this and make it clear for everyone?

Tony Valente ends the bike-share tour of Spain in Valencia:

JCDecaux manages Valencia’s bike-share system – Valenbisi. Bike-share stations were well located close to transit and in principle plazas, but technology was an issue as it was a struggle to gain access to the system. Repeated attempts to create a profile and withdraw a bike were denied in multiple stations.  Eventually I gave up.

Valencia’s cost structure makes it a bit of hybrid since short-term memberships are available, but cost 13 Euro for seven days access which provide up to 30 minutes free rides, with a one Euro charge for the next 30 minutes, followed by three Euros for the following 60-minute blocks. In comparison, renting a bike was nine Euros per hour, so there was some potential for savings if you could get access to the system. I could not …

It was unfortunate because Valencia had by far the best network of separated bike lanes widely dispersed throughout the city. The lanes also connect to a park created in the 1950s when Valencia decided to divert the Rio Turia after a disastrous flood. In its place they created kilometres of recreation space that includes bike lanes and running trails, now called Jardin del Turia.

This corridor forms a spine for bike travel connecting central Valencia to the Mediterranean. Ramps link the former river bed with city streets with separated bike lanes sometimes at street level, but otherwise on the sidewalk.

We cycled all over Valencia in these lanes and loved it. In Valencia we felt very safe riding on well planned infrastructure.

Keep the speed down and he will smile for you too.

Tony Valente sends in this report on bike-sharing in another Spanish city.

In Segovia, home of one of the world’s best-preserved Roman aqueducts, the question quickly became: where are the bikes? Segovia’s system OnRoll had multiple stations throughout town, but no bikes could be found.

Reading the information at one of the stations it appeared none of the bikes were electric, which is unfortunate in this hill top town with very steep grades. The system required users to have a functioning mobile phone and register in a local office. Clearly no one in Segovia has seen what it costs to roam abroad for Canadian mobile customers.

The cost of riding? Three Euros per day per bike. Sadly, no bike ever was found to try in Segovia and the registration system was a real disappointment.

Segovia info point for bikes … but where were the bikes?

Tony Valente reports this week on bike-sharing in Spain.

Off to Salamanca, home of one of Europe’s oldest universities and featuring several UNESCO world heritages sites.

In Salamanca it became clear to that bike-share systems make a conscious choice to not compete with bike rentals since Salamanca’s system – Salenbici – does not offer short-term rentals.  A not-so-prohibitive annual fee of 26 Euro means you probably need to be in town for at least a few days to recoup the membership fee. In contrast, renting a bike at a local shop cost only five Euros per hour and got successively cheaper per hour the more time you wanted the bike.

Salamanca’s system was relatively low tech. That is to say you could not just walk up to a street terminal and use your credit card, but needed to go to an authorized location with fixed office hours where you could complete the registration. Between that complexity and the annual only fee,  a conscious decision was made not to ride Salamanca’s bike-share.

Where is the silver lining? Well, Salamanca as a smaller, more provincial town benefits greatly from less traffic, making riding in general more enjoyable as well as a great network of separated bike lanes. This was a place where you wanted to ride and were able to do so looking at amazing views of the city while crossing 2000-year-old Roman bridges that add something ancient to cycling infrastructure.

Occasional PT correspondent Tony Valente was in Spain a few months ago and sends in this report on bike-sharing in four cities – one a day this week, beginning with Madrid.

While not quite as mountainous like Vancouver, Madrid has a few hills. That is likely why all bikes in the bike-share feature electric assist – and it quite simply made using the bikes very enjoyable! So much so its easy to go mad about BiciMAD … the Madrid bike-share’s catchy name.

The system is managed by BonoPark. It can get pretty toasty in Madrid temperature wise and the electric assist can help minimize sweating while enjoying the city’s sights. This bike share is a real alternative to bus or metro transportation because it allows both citizens and visitors to the city to rent at a relatively cheap daily rate.

The point-to-point usage of the bike-share made getting around very easy. There were many stations around town conveniently located in major plazas and close to transit and metro stations.  On the downside, it should be acknowledged  that the bikes were not all equal. On one occasion while pedaling up a steep calle, the electric-assist started kicking in and out. It was a bit disappointing and it ended up with one sweaty user by the top of the hill. It will be difficult to forget how heavy an ebike and its battery can be unassisted.

Docking stations were also a bit finicky when returning and withdrawing bikes. MOBI’s bike-mounted release mechanism appears to be a lot simpler in comparison.  For seniors and those who struggle to lift a heavy steel bike, the system for connecting bikes required a lot of muscle.

Signage for tourists is not great when interfacing with the bike-share system. Following the English instructions on screen was further complicated because the terminal seemed to have a preference for some credit cards over others.

The major drawback of the Madrid bike-share, however, is not its bikes but the lack of infrastructure. There are few separated bike lanes. Madrid is a chaotic capital city and interestingly an approach has been taken to have bike riders ride not in the lane closest to the sidewalk, which is reserved for buses, but in the lane reserved for mopeds and motorcycles.

Even experienced rider will struggle with this. In theory this lane is limited to 30km/hour, but in reality mopeds and motorcycles whiz around you at speeds closer to 90km/hour. Children or the elderly should not be forced in to this lane.

North Americans on vacation are charmed by old cities but they are not always able to explain what they like best about their visit to places like Paris, Buenos Aires or Seville. They do share some obvious critical factors of urban planning that also explain why some North American cities like New York, New Orleans or Boston are sometimes described as “European” in character.

The foundation for the similarity is the extensive use of shared public spaces. Most European cities also have small apartments the same way New York is known for small living spaces. These apartments may not be air conditioned and likely have tiny kitchens that are not suitable for entertaining. Consequently, you meet your friends outside. For many that means outdoor eateries, front stoops, public parks or museums, and the city itself becomes an extension of your living room.

This key difference means that most North American cities feel dead compared to a city designed for shared public space. The public spaces in North America are to be moved through rather than a place to congregate.

Most people entertain in their homes rather than meeting out. This means there is little outdoor nightlife or cheerful music. Walking into the nightlife of a typical Spanish city is exciting for a North American – the music and vibrancy of people gathered to talk and dance and smoke and eat and flirt and be seen is friendly and engaging.

Instead, many North Americans returning home, charmed to pieces by their stay in Venice or Paris, simply can not fathom transferring any of those elements to their home soil. I mean, plaza cafes are nice and all, but where the hell would you park?

All around the world, highways are being torn down and waterfronts reclaimed; decades of thinking about cars and cities reversed; new public spaces created.

Most famously, in beauty-mad San Francisco, the 1989 earthquake overcame years of entrenched thinking: the Embarcadero Freeway was taken down, which reconnected the city with its now glorious waterfront. In Seoul, the removal of a stretch of highway along the now-revived Gaecheon stream has made room for a five-mile-long recreation area called Cheonggyecheon. In Milwaukee, the destruction of the Park East freeway spur has liberated acres of downtown for parks and neighborhood development. Even the nearly-30-year, bank-busting Big Dig fiasco made Boston a better place by tunneling a downtown highway, though it was obviously nobody’s idea of a stellar urban redevelopment project.

In many ways (sheer length, for one), and with the exception of Seoul’s Cheonggyecheon, Madrid Rio is a greater achievement than the examples listed above, even including New York’s High Line.  And yet it is hardly known – perhaps because it is so new, or was eclipsed by the financial meltdown, or doesn’t quite integrate with the city as do others more centrally located and not in a river valley.  Or maybe because it’s in a poorer part of the city. 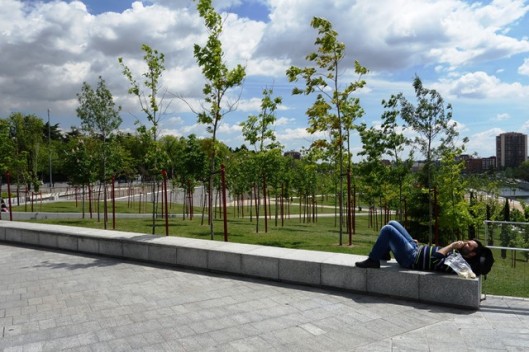 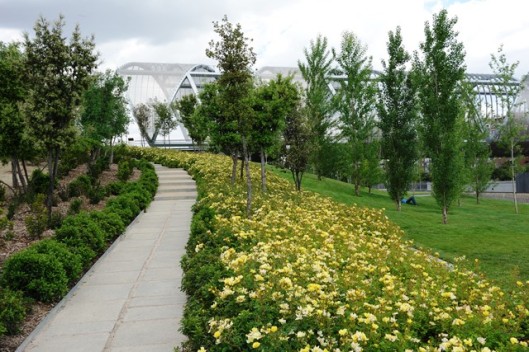 … a 19th-century complex of brick and glass buildings, including a derelict slaughterhouse and greenhouse, are now being renovated to house art studios and a dance theater. 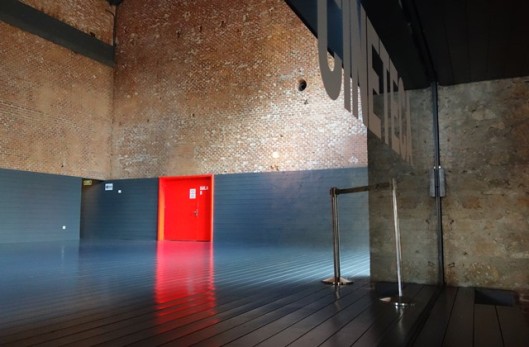 It’s only a pity that the city also awarded Dominique Perrault, one of the celebrity architects who lost the competition, a late commission. Evidently nervous about leaving the project without a new architectural landmark, the government approved his costly design for an oversize footbridge.  Wrapped in an immense, incongruous spiral of Mr. Perrault’s signature stainless-steel mesh, the striking bridge blocks views and conjures up some giant antenna that has crashed in the park. 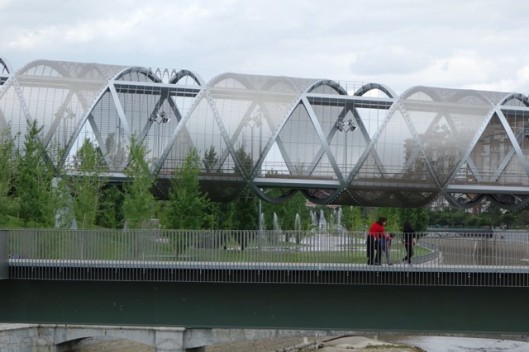 Some of the other footbridges: 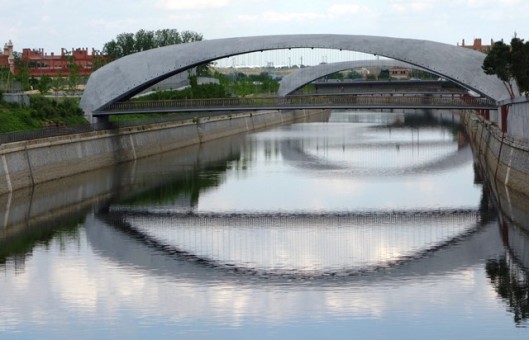 This week, we’ll pull out images from a trip to Madrid taken last May – specifically, those of Madrid Rio, with quotes from a Dec 2011 New York Times description:

Pilar Martínez, who oversaw the park project in the mayor’s office, told me that the official price tag of Madrid Río hovers near $5 billion, all but $500 million of it spent to bury the highway. Twenty-seven miles of new tunnels were dug; countless tons of granite installed to make paths and fountains; some 8,000 pine trees planted. …

Add to this wading pools for toddlers that landlocked Madrid parents already fondly call “the beach,” and a paved plaza, in patterned tiles, large enough to fit a few hundred thousand people. 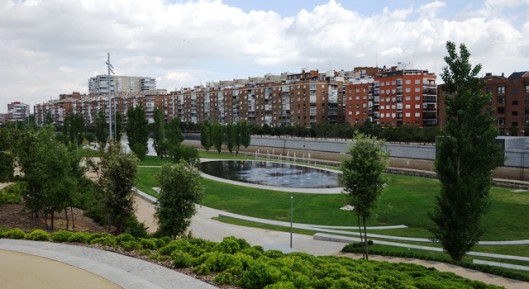