From Ohrn: A lively crew of people rode their bikes from Science World to City Square to show support for YES voters.

As an urban blogger, Metrobabel doesn’t get enough profile.  Here, as an example, are the elements of the Mayors’ Council Plan summarized and illustrated in the most accessible form I’ve seen so far:

I have been following your blog for awhile and have seen you speak a few times as well. I am trying to help as much as I can for the YES side of the transit referendum.  I want to write to you to let you know what I am finding effective.
.
I notice that there are YES staff at transit stations lately.  Great!  I have also witnessed some NO voters yelling about Translink’s accountability to the YES staff.  In these cases,  I approach and say to the staff, “I want to vote yes because the ballot includes public reporting and independent audits.  The question makes it clear that the funds are used only for transit, not going to general revenue.  If I don’t vote yes, Translink will just stay the way they are”.  I have done this four times, and in each case, the NO person has asked for more information about the accountability aspect of the referendum question.  In each case they have switched from dogmatic yelling to curiosity and genuine questioning.  Great!
.
Anyway, I thought you might be interested to know because I think this is a good angle to use to convince people to vote YES. I will continue my ‘covert ops’ whenever I see the YES staff being yelled at by NO voters.
.

My advice to the Yes Campaign is this:

Even though it is not on the ballot, defend TransLink . There is plenty of evidence that it does a reasonable job with its funds and that wastage accounts for no more than 1%. See the following for ammunition:

Defend our transit system. While not perfect it is among the best in North America.

While this video has had a lot of play (for good reason; it uses humour), it nonetheless does the No side’s job: it reinforces, right at the beginning, the meme that TransLink (and political leaders) are despicable.

And therefore, unintentionally, justifies a no vote.

UPDATE: Further to Nevin’s link, more from Daryl Dela Cruz (one of Surrey’s most amazing 19-year-0lds):

Former CEO Pat Jacobsen on Plan B (phone interview for my next Business in Vancouver column):

“A No vote will do nothing to improve TransLink. It will be very difficult to find a new [permanent] CEO. TransLink will be unable to maintain its aging physical plant. It will continue to lose public confidence, and it will spiral downwards.”

McGarrigle said Metro Vancouver can’t “afford” to lose the vote to the No side (where) “we buy into a future where all taxes are bad, where public services are starved of funds, where our roads aren’t upgraded and where transit can’t keep up.  And we can give into a future where the gloom of cynicism descends over the region like a stifling blanket while congestion increasingly costs us all more time and more money and more expensive choices down the road.”

Iain Black is President and CEO of The Vancouver Board of Trade.  And despite the title, he gives one of the best reasons for voting Yes: an end to ‘Plan B’ parochialism.

Voting “NO” a bridge to nowhere 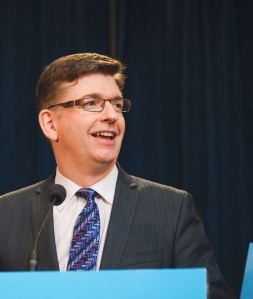 “More stuff” is the most compelling argument as to why this referendum should pass. Simply, for the first time in Canadian history, we have an opportunity to direct our tax dollars to a very specific list of expenditures (with legislated transparency and auditability) to, in this case, produce meaningful improvements to our transit and transportation network. 400 more buses (from 1800 or so to 2200), 129 more passenger cars for SkyTrain, 10 more cars for the West Coast Express (plus an extra locomotive!), a 50% increase in SeaBus service… The list goes on and on. …

Meanwhile, the “NO” arguments have emerged and, predictably, are either out of context, or grossly oversimplified. One of my personal favorites, though, is the suggestion that voting “NO” will force the appearance of a mysterious “Plan B” to emerge as to how to move the region forward in transit and transportation planning.

This is the “Plan B”: a return to an uncertain list of transportation priorities, with each one subject to parochial bartering by mayors tempted to focus on the interests of their own municipalities instead of the broader interests of the region, and no certainty (and a separate multi-year political process needed) as to how the municipalities will fund their portion. The status quo leaves citizens and business owners standing by helplessly as investments in transportation fail to get out of the starting blocks, and it’s why our goods don’t move properly, and why we have gridlock now – before the 1 million additional people arrive over the next 25 years.

Alternatively, we have in front of us an unprecedented, laudable, agreement from the current Mayors Council on a 10-year transportation and transit plan – a clear commitment as to their priorities. Further, by identifying in advance the funding source for the municipal portion of the plan, it will be easier to attract the funding from the crucial senior government partners.

Voting “YES” is the only rational choice to meaningfully move the region forward past decades of paralysis and dysfunctional decision making. Beyond the long list of new hardware, with a “YES” vote we can put the status quo behind us, and actually bring an end to the horror movie.

A blunt-talkin’ Millennial from SFU.  Three good reasons to reprint this from Burnaby News:

7 Reasons Millennials Should Vote Yes on the Transit Referendum

Tax hike? F*ck no.  That is pretty much the central intellectual argument put forth by Jordan Bateman, and his loyal penny-pinching minion’s at the right wing think tank the Canadian Taxpayers Federation.  They cloak their general aversion to taxation of any kind, by focusing their campaign of anger on Translink and its perceived, and in some cases, real, inadequacies.   What Bateman fails to relay is that Translink is not the ballot question.  Transportation expansion, congestion reduction, and how fund to fund these goals, is.  Here are six reasons why voting yes will be in your best interest for the transit referendum.

Anyone from the burbs who’s partied downtown on the weekends and missed the last Skytrain knows the night bus service is infrequent, over packed, and in desperate need of expansion.  By voting, yes, you’re also endorsing a plan by the mayor’s council to increase services by 80%.

For all the cycling enthusiasts, if the Yes side wins get stoked for 2700km of new bikeway paths in the Metro-Vancouver region.

A yes vote will help ensure Surrey will receive a light rail service that will extend all the way to Langley.

Voting yes will green light a tunnelled sky-trainline down the Broadway corridor in Vancouver.

The Pattullo Bridge is rapidly deteriorating and frightening to drive on.   If the transit referendum succeeds a new bridge can begin construction.

7.     The reality of voting no will be much scarier than a slight increase of 0.5% in the sales tax

Without necessary funding after taxpayers in Washington State rejected a similar regional proposal, their transit provider was forced to cut up to 25% of services on individual routes.

Zachary Paradis is a third-year SFU student working towards a major in Political Science and minor in Communications.

From Business in Vancouver:

Vancouver has about one-tenth the traffic fatalities as an automobile-dependent city like Houston, Texas

If you want to reduce your risk of dying in a car accident, then you should live in a city with lots of public transit and high transit ridership.

That’s the conclusion of Todd Litman, an urban planner who specializes in transit and is the executive director of the Victoria Transport Policy Institute. He recently published his findings on transit and safety in the Journal of Public Transportation.

“Vancouver has a much lower fatality rate than most North American cities, and you could essentially say it’s because Vancouver has committed to multi-modal transportation and smart-growth development patterns,” Litman said, referring to planning decisions to boost the number of pedestrian, bike and transit trips and build higher-density residential buildings near transit.

“Vancouver has about a tenth of the traffic fatality rate as in automobile dependent cities.”