Jim Green came to Vancouver in 1968, at a time when the Downtown East Side was in transition.   He  eventually became executive director of the Downtown Eastside Residents Association “during the challenging years when development was encroaching on the city’s poorest neighbourhood,” observes the Sun.

Jim was another example of the immigrant success story – though, because an American who came here at the time of the Vietnam War, perhaps not thought of that way.  From these immigrants Canada received a remarkable legacy and Jim was one of the most remarkable, maybe one of the best mayors we never had – though his contribution as councillor was substantial enough.

Not only is Woodwards a physical testament to the values he fought for, but the way he brought people together and the persistence and skill with which he made it happen was truly a ‘Vancouver’ achievement by a man who not only chose this place as his home but changed the city by his presence.

Coincidentally I received today an interpretation of Jim’s neighbourhood in a short-story video by Larry Kent, another immigrant who came to Canada in 1957 and in his work explored our human condition.  So here is Hastings Street, just before the time when Jim Green would walk these same blocks, and through his commitment to the community, both save it and change it.

Miro Cirnetig pens an appreciation of Jim Green and his devotion to opera, along with this suggestion:

So isn’t it time to name a public place in Vancouver’s inner city for Jim Green?

Perhaps Pigeon Park or Crab Park, those green spaces he fought to preserve because 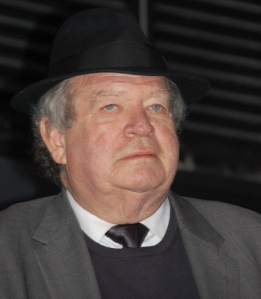 he knows they are crucial to a good life in the city’s poorest neighborhood. Maybe Green’s name should be on a street or lane way. Or the square of the new Woodward’s building, the edifice Green helped make a reality and is now a catalyst for the Downtown Eastside’s revitalization without forgetting its less wealthy residents.