Vancouver’s Point Grey Road on a Sunday afternoon in April. Where 6,000 – 10,000 motor vehicles once dominated most days, children now ride safely on a busy and spectacular Greenway. And the experience for everyone is terrific. Car-mageddon indeed. 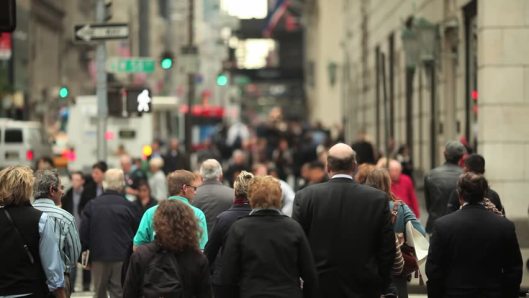 There has been a very valuable discussion on Twitter from Ms. Sinenomine about the use of the term “Walkability”.

She is well worth a follow, and presents a stalwart and stark view of how the language we use focuses away from the root of accessibility and universal acceptance. She states the obvious: we need to do better at ensuring that the most vulnerable have the same access and social equity to sidewalk pavements and public spaces, and we must start doing that now. END_OF_DOCUMENT_TOKEN_TO_BE_REPLACED

While there has been much discussion on the health and social importance importance of creating universal walkable places, decision makers want to know the bottom line. What are the economic outcomes of investment in the walkable public realm, and is creating walkable places the right thing to do from a resident, business, and community perspective?

This webinar with transportation specialist Todd Litman of the Victoria Transport Policy Institute explores the economics of investment in walkable infrastructure and communities, and will provide  innovative and practical ways to communicate walkability benefits to politicians, decision-makers, and the public. 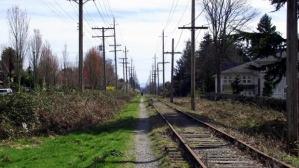 What it was:  an abandoned railroad

A few ideas came to me while checking out the Arbutus Greenway plans yesterday and chatting with project staff.

You can see the plans and quiz staff — see HERE — two sessions yet to come.  Deliver your opinions online too, if that suits you better.

END_OF_DOCUMENT_TOKEN_TO_BE_REPLACED

After buying an abandoned, inacessible railroad, taking out the rails and ties, building a temporary set of paths, and holding 25 outreach events involving over 5,000 participants — it’s time to get a gander at some serious plans.  Read on, indeed, to a 38-page PDF that’s chock full o’delights.

It still amazes me that there is so much within a 5-minute walk or a short bike ride of the Greenway (check out the nifty map on page 2).  And I’m very pleased to see serious thought has gone into connectivity from the Greenway to the bike lanes on the north and the south — and all of them in-between.

It’s not specifically mentioned, but I really do hope that the design will find a way include those celebrated Heritage Blackberries.

END_OF_DOCUMENT_TOKEN_TO_BE_REPLACED

The temporary surfaces have been in place for a while; the big design jam happened, and now it’s time to look at a design concept.

Written in 1957, with now-outdated thinking, the BC Motor Vehicle Act is ripe and ready for major update. As PT has discussed HERE, with detail as to what’s outdated.

If you have been in San Francisco  California in the last few weeks  you have probably seen them-electric scooters are everywhere. And as discussed by a reporter for the New York Times section California Today  in San Francisco “Shared electric scooters are available to reserve and rent by app for as little as $1 a ride. They are billed as a way to “help make transportation better and more environmentally friendly” by one start-up, Bird, which has netted $100 million in venture capital funding.” END_OF_DOCUMENT_TOKEN_TO_BE_REPLACED

Slow down Bollards removed because they slowed down Traffic 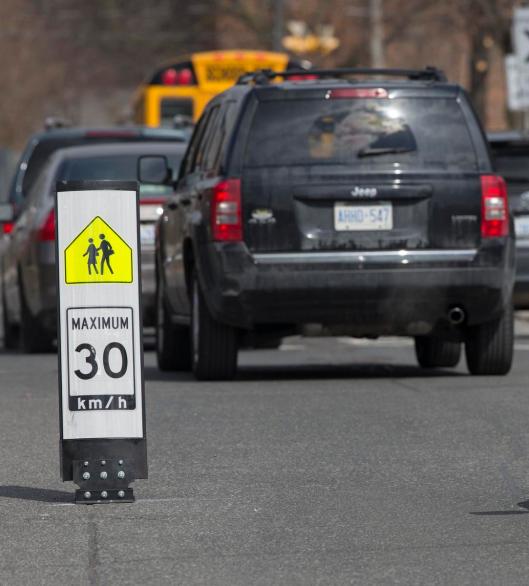 In the kind of story that reminds how much motordom dominates over pedestrian safety and comfort , The Toronto Star reports that flex-post signs near a public school  designed to slow traffic were removed . Why? Because they slowed traffic. Imagine. One week after they were installed, they were removed on the basis of one complaint. As the Toronto Star reports  “the complainant, who said he submitted an email to the mayor’s office and included dash cam footage of traffic significantly slowed down in the 40km/h school zone. The dash cam speedometer registered his truck going about 30 km/h leading up to the flex-post sign, with the speed reducing by about half as he approached it.”

The complainant’s speed was reduced to 5 kilometres per hour while he slowed to manoeuvre around the flexi sign. And that is too slow for motordom, kids’ public school area or not. Even the manager of Traffic Safety and Data Collection responded that “Our initial assessment indicated that the road had sufficient clearance around the sign, but when cars parked adjacent to the sign, we observed traffic slowing significantly or moving around the sign into oncoming traffic.”

Of course this can also be seen as slowing traffic down enough that they can manoeuvre slowly around each other with lots of reaction time. But that is not Toronto’s take, and the signs were removed  “in the interest of public safety.”  In British Columbia  30 kilometres an hour is the speed in posted school zones. Toronto has not acquiesced to this slower, safer speed for their schools. As one local observed “The problem that I think we have in Toronto is we prioritize the convenience of people driving cars over the safety of anybody who’s not driving a car.”

The City of Toronto is having a tough time implementing  their 80 million dollar version of Vision Zero, which is supposed to  mean that all lives are valuable and no lives are lost due to road violence. The City has controversially suggested merely reducing their death rate from road violence by a percentage instead of completely eliminating deaths as their goal.  Around this Davisville school area  they are proposing installing  zebra markings and school stencils as if that is something novel. It is a soft approach that does not protect vulnerable road users or slow cars down, leaving the impact of collisions still solidly on the pedestrian. The words of the general manager of Transportation Services speaks volumes about the ambiguity of being a pedestrian in Toronto: “It’s a very complex ecosystem, the area around a school, but, from our perspective, student safety is the highest priority. After the pilot is done and we’ve assessed it, my guess is we’ll come forward with it as part of our Vision Zero toolkit.”

There’s nothing complex about slowing traffic and insisting that children and adults have the right to walk safely and comfortably to schools, shops and services. Meanwhile road violence and motordom continues in Toronto~11 pedestrians have been killed in 2018 with an expected 60 pedestrians losing their lives in Toronto by the end of the year.