Co-sponsored with the Canadian Centre for Policy Alternatives (BC Office).

RSVP here
Dr. Benner will discuss his research on the relationship between growth and social equity in urban regions, arguing that different trajectories can be explained, at least in part, by the relative strength and diversity of regional information sharing networks where data is shared and common understandings developed across diverse constituencies.

Making Space for the Unexpected Guests of Climate Change

Co-sponsored with SFU’s Faculty of Environment

This talk will explore current findings about climate change and human migration and displacement, look at lessons learned from rural-urban migration, and explore directions for the future in policy and practice. It will explore who is on the move related to climate change, where are they coming from and where are they headed, how are cities affected, what challenges and opportunities lie ahead? The talk will conclude with reflections on maintaining a safe operating space for humanity—in cities and landscapes interconnected with urban spaces.

A Century of Olympic Urbanisms:  Building for the Olympic Games, 1924 to 2020

Judith Grant Long surveys the century long history of building for the Olympic Games.  Offered from the perspective of host cities, she argues that host city outcomes have been both better and worse than commonly understood, and points to the changing fortunes of global cities and the evolving business model of the Modern Olympic Movement as key influences in a story that encompasses the origins of the “Olympic legacy” concept and contemporary efforts to “right-size” the games.  Calling for more responsible leadership on urban impacts from both host cities and the International Olympic Committee, Long makes recommendations to recalibrate the scale of Olympic infrastructures, and to guide host cities planning for the Olympic Games and other sports mega-events.

If the most recent blog in Rails for the Valley is correct,Vancouver City is about to spend $400, 000 to scrap the above line which the city spent $18 million to buy and renovate. If true, it would be a backward step for the city and advocates of a practical streetcar service on that line connecting Telus Science World and Granville Island and the future connections to Stanley Park. …
.
Are there no companies like Telus, Pattison, Fortis, etc prepared to step forward and in a non-political way prevent not only this from happening but assisting in its rebuilding and extension?  Surrey just invested in $1 million worth of rail extensions with help from corporate partners – Southern Railway of BC, BC Hydro, RDM Enterprises, RNR Railworks for its Cloverdale Interurban system bypass. …
.
One does not want to believe that this is a political move to line up the Arbutus line and the False Creek line as a bikeway.  Nothing wrong with that as part of a transit line as well but $400,000? If I remember properly, there was an argument that they did not want to spend $100,000 to renovate one of the BCER Interurbans.

This event brings together academics, artists, cultural presenters, and urban planners from Canada and the UK in order to re-imagine the impact and relevance of the visual and performing arts in such large-scale events.
Visit here for more details on the full schedule of events, including a series of curated “art ambles” in the city – and to register.

Here’s what Rio aspires for the future of its athletes’ village after the 2016 games, as reported in UrbanLand:

Unlike other Olympic cities, where facilities were built in areas that needed renovation, Rio’s Athletes Village will be constructed in Ilha Pura in Barra de Tijuca, and development will continue for more than 15 years after the Games conclude. The Olympic Village is expected to become luxury housing, with the more than 3,600 apartments used by the 18,000 athletes sold to buyers. The planned four-bedroom apartments in Ilha Pura will be 2,200 square feet (200 sq m), compared with 1,600 square feet (150 sq m) in Rio’s wealthy enclaves such as Ipanema and Leblon—a key selling point.

The decision to build luxury condos for the wealthy has raised some eyebrows. “I think if the government is paying the bill, there should be some sort of subsidies for poor people to be able to buy apartments there,” says Murray. “Many feel the Olympic Games are being held not for the good of the sports and of the citizens, but for the interest of real estate speculation.”

Andrew Zimbalist, Robert A. Woods Professor of Economics at Smith College in Northampton, Massachusetts, and an expert on the economics of the Olympic Games, questions building luxury condos on the site. “[D]o they have enough high-end individuals who are able to buy a luxury condo?” asks Zimbalist. “Maybe the Athletes Village should have been turned into low- or middle-income housing for the people in the favelas.”

Two years to go to the Rio Olympics, and as seems customary for the Summer Games, the bad news is escalating faster than the construction: “The World Cup and Olympics threaten to overwhelm Rio,” in The Guardian.

The city is now desperately behind schedule for its 2016 Olympics – one insider put it at 10% ready, where London was 60% ready at the same stage. … 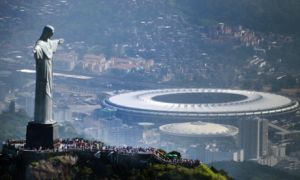 The nearest parallel to the Olympics nowadays is probably a war, an outburst of patriotic fervour, fathered by mild mendacity out of public expenditure. Criticism is suppressed. Medals tables are listed like battle honours. Home contestants are “heroes”. Winners are showered with state baubles and losers stripped of grants.

Some of Rio’s more cynical citizens even give this parallel a sort of welcome. They hope the Olympics might discipline a lethargic city bureaucracy, defeating the nay-sayers as deadlines fall due and yielding at least some projects of lasting usefulness. They are pleased that Rio is now the focus of world attention, with resulting self-criticism. The favelas are crawling with academics and camera crews as never before, as if waiting for them to explode for the World Cup and the Games.

This could suggest a new phenomenon, the mega-event as the critical mover in cities where the politics of urban renewal has seized up. Whether such a trauma is the best way of ordering any society is another matter. Any city that can blow billions of dollars on a fortnight’s party and not repair public services such as Rio’s has its governance seriously awry.

Vancouver avoided the worst two results: over-expenditure on an extravagant festival with few economic gains, and unneeded structures that left no legacy.  Still, I don’t think the Games had that much up-side domestic benefit: It didn’t announce our coming-of-age (Expo did that) or make us any more or less desirable than we already were.  We got some much-needed infrastructure, notably the Canada Line and the Convention Centre – but they would likely have happened anyway, though not as quickly.

The Olympics came, they went, and our city life went on much as before.  That’s not going to be the case in Rio.  The question is whether the consequences will change the Olympics.

From Scot Bathgate: Just weeks after Olympics, Sochi is already a ghost town

Alexander Valov, who runs “Blog Sochi,” captured photos that depict a desolate Sochi, with infrastructure already breaking down and some construction never completed.

Some construction remains undone to this day:

In Vancouver, three months after the Olympics:

Hard to believe London’s Olympics are only a few months away.  The Olympic Village is largely complete, and here’s what it looks like.

For more on the new city arising in the East End, go here to UrbanLand.

Also, check out the show at the Vancouver Archives on the development of our Olympic Village.  Yuri Artibise describes it over at Spacing Vancouver.

At least the new Olympic Village has received more enthusiasm. A conscientious updating of a 1960s-style monumental social housing project, its concrete blocks reaching up to 13 stories (high for low-rise London) are somewhat forbidding without mature trees to soften their impact, but have been praised for their high building standards and private central courtyard gardens. Crucially for the project’s claims to benefit local communities, half of these apartments will be reserved for affordable, rent-controlled housing after the games, an invaluable asset in a city with Western Europe’s highest rents.

This is Georgia Street on Monday evening – the entire of right-of-way from Library to Post Office – as fans gather to watch the hockey game on a giant TV in front of the CBC: 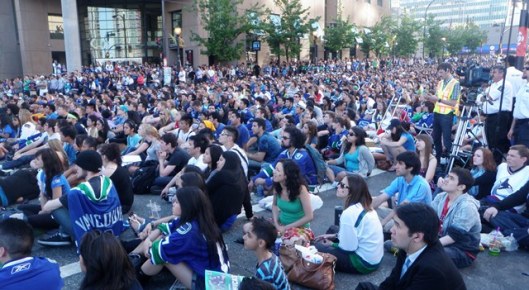 I can say pretty confidently that the City, when I was on Council, would never have considered the possibility.  Closing Georgia, that is – not the prospect of the Canucks winning the Stanley Cup.   Our experience in 1994 (I personally found out what tear gas feels like) would not have been encouraging.

But more than that, no one would have thought we could get away with closing off the major arterial through downtown at the height of rush hour.  All the concern would have been the impact on car traffic, not the desire to serve the fans.  Nor would the fans have thought to come downtown, mainly on transit, to experience the event in a public place – the middle of a street – whether Georgia or Scott and 72nd in Surrey.  (Can anyone explain to me why that intersection became – without anyone saying so – the understood gathering place?)

Most credit the Olympics for this conversion – and certainly that had a huge impact on the Engineering Department, the Police, TransLink – everyone involved in logistics who learned how to respond to continually changing circumstances and to do it quickly and with confidence.    And to the people of the City, who likewise have learned how to celebrate in the public spaces of Vancouver with – so far – civility.

Frances Bula calls it “the strangest travel piece ever” – here in the New York Times.  Judge for yourself.

Actually, it deals more with the neighbourhood around the Village than the site itself, so this might be a good time for a plug:

What began as an ambitious experiment in cutting-edge sustainability found itself caught up in economic strife and bitter politics. And yet, the Village remains what it set out to be: a leading-edge green neighbourhood that is recognized as one of the best of its kind in the world.

The SFU City Program is offering a unique on-site opportunity to learn how it was conceived, designed and built, taught by the senior professionals directly involved. The course also looks beyond the Village itself, to explore lessons learned about project feasibility for green neighbourhoods elsewhere.

The Village has been awarded LEED Neighborhood Platinum Certification — the highest achieved in North America so far – and by that standard is a success. But it’s still debated whether it was unwise to have required such a high standard of sustainable technology and design if the lesson to the development community is that it results in an ‘uneconomic’ project.

The two-and-a-half day course starts on March 31 to explore the sustainability aspects of the Village – on site and with the key professionals who did the work.

UPDATE: Another New York Times piece, this time on the economics and politics.  Quote from Brent Toderian, City Planning Director:

… the development, intended as a green demonstration project, has “transformed city building in every aspect.” The Olympic Village site, a rare case in which the entire neighborhood has a LEED Platinum rating, features a net-zero building that produces as much as energy as it uses, sites for urban agriculture and a neighborhood energy utility that uses heat recovered from raw sewage to heat all the buildings in the development. And the area around the village is becoming a cultural and residential destination.

Saturday, Granville Street, on the first anniversary of the Winter Olympics, looked like this: 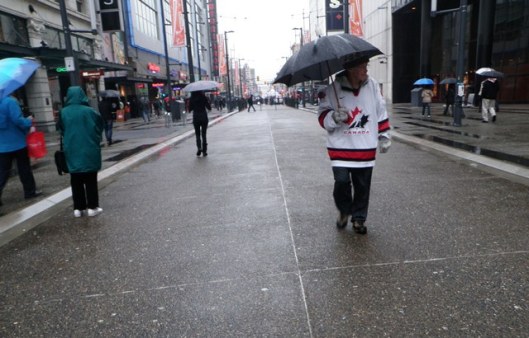 Last year, about the same time, the weather was like this: 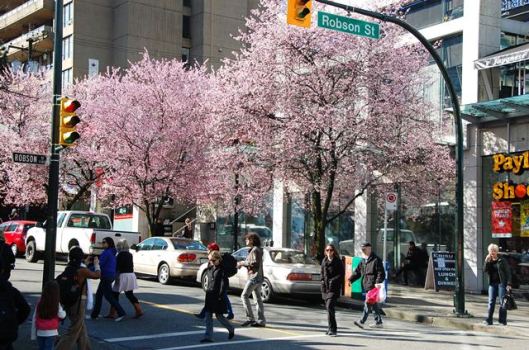 Saturday was just Nature’s way of reminding us that we probably wouldn’t have such blissful memories if they were filtered through heavy, cold, umbrella-compulsory rain.  Nonetheless, the weather didn’t stop us from doing this: