This just in from the City of Vancouver:

This July and August, Vancouver saw record cycling volumes on five of the city’s 10 fully protected bike routes, including at Science World, Union and Hawkes, Hornby and Robson, Lions Gate, and Canada Line. …

Over the past year, several improvements have been made to create more opportunities for people of all ages and abilities to choose to cycle to get around the city for transportation and recreation.

Of priority cycling routes identified in the Transportation 2040, the City has now completed Comox/Helmken Greenway, Point Grey-Cornwall section of the Seaside Greenway, spot improvements to the Union/Adanac Bikeway, and safety improvements to SW Marine Drive.

*Data is not available for August 2017 due to technical difficulties with counter equipment.

Despite extensive construction work on Burrard Bridge and Point Grey Road over the last year, cycling volumes along those routes have remained high.

The highest record breaker in the summer of 2017 was the Science World location.

The bike counter at Science World was installed in March 2013 when the first bike count of 53,000 was recorded. Only four years later, bike counts at Science World have increased more than four times that amount. The highest monthly bike volume that has been recorded to date is 204,000, which was reached at Science World last August 2016. This Science World record was broken this July reaching 227,000.

Let’s work backwards from September, 2016. Pro Walk Pro Bike Pro Place, almost always held in the US, will be in Vancouver. In fact, we’re having a whole Placemaking Week Sept 12-18 AND celebrating Jane’s 100th birthday (may she rest in peace).

Vancouver Bike Share (the temporary name until CycleHop announces a sponsor) launches in June, expands in July, and should be running smoothly by September. Inshallah.

Five protected bike lanes downtown are to be built and finished by the end of July, 2016. Yes, 2016. It sounds like more than it is. Some are little blips on the map.

Here’s my 2 cents: I applaud the speed and approach. We should be constructing multiple lanes at once. Building upon and expanding the current AAA network is key.

The couplets on Nelson and Smithe (one-way on each street in same direction as vehicles) are: on Nelson from Richards to Beatty (shouldn’t that go to the Cambie Street Bridge?) and on Smithe from the bridge to Richards. If Nelson/Smithe went as far as Hornby instead, people would have so many more options and we would almost have a complete All Ages and Abilities (AAA) link from Yaletown to the West End.

Some of the bike lanes in the plan could conflict with vehicles turning. Please be careful in the final design. 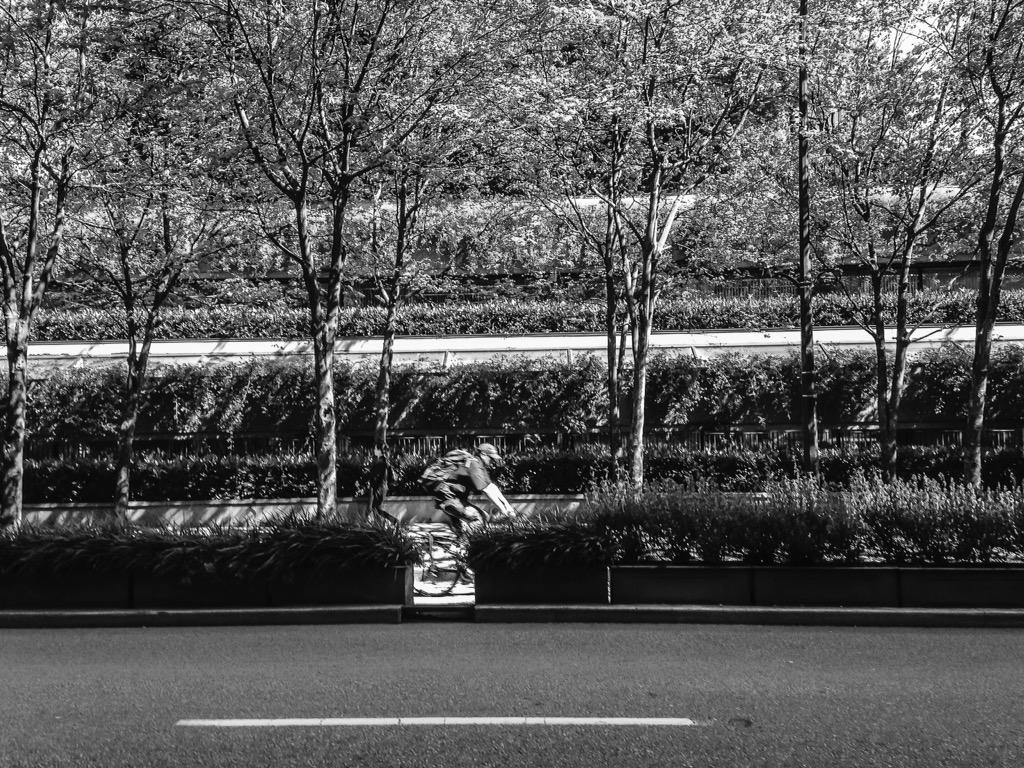 It was only installed four years ago, but the Hornby Street bike lane looks and feels like it’s been here forever.

The organization had criticized Vancouver city council for a lack of public consultation, spoke out at public meetings and even commissioned studies to show the lanes’ negative impacts on business.

But now, nearly five years since the bikeways were approved, the DVBIA is now accepting them, as it sponsors Bike to Work Week.

“Times have changed and here we are and we have separated bike lanes downtown and they’re here to stay,” president and CEO Charles Gauthier told The Early Edition’s Margaret Gallagher.

“It is a mode of transportation that people are using to come here and we don’t want to deny anyone access to the downtown, including cyclists.”

Here’s a longer interview with Mr. Gauthier by Alison Bailey at News1130.  It seems that DVBIA members now realize that people want to ride bikes, lots of them, and this isn’t going away. And when infrastructure is in place to make this safe, the number of people on bikes rises dramatically.

But I’m seeing people of all ages and abilities that are riding in the bike lanes that I wouldn’t have seen five, ten years ago. And certainly, the case that the engineers made and the case that cycling advocates made that separated bike lanes are really the necessity to get people of all ages and abilities to travel and commute that way has proven to be correct.

I think this is a great illustration of latent demand.  A decade ago, people who would have liked to ride a bike downtown were concerned about safety, and did not ride. Hit the skip button to 2015 and with vastly improved infrastructure, and a growing network, the number of riders is rising quickly and the demographics are expanding. So building bike lanes was a leap of faith, now widely accepted as a good thing.  As they say:  “You don’t justify a new bridge by counting the number of people swimming the river.”

It’s a change for the better, for many reasons, for all of us, no matter what mode we use to get around.

[I spoke to Mr. Gauthier at the Share the Road Commuter Challenge event last week.  He promised that he’d take up the challenge next year.]

Further to making cycling safer at intersections (below post), the City just took another helpful step over the long weekend where the Hornby and Dunsmuir protected bike lanes meet.

When I cycled through on Saturday, crews were drilling the street apart – so I naturally assumed the work was for utilities or some other priority.  But no, it was to make the problematic intersection safer for bicyclists and pedestrians by extending their zone into the street, discouraging left turns and clarifying respective spaces.

Sightline author Alyse Nelson reports back, in a well-researched and beautifully illustrated piece, on what she discovered in Vancouver:

When my husband Jason and I planned a trip to Vancouver, BC, we decided to bring our family’s bikes just in case. With our eight-year-old son Orion in tow, I wasn’t sure we’d have the chance to ride unless we sought out an off-street trail. To my surprise, we were able to ride—and not just on trails we had to drive or take a bus to, but through the heart of downtown Vancouver on a mixture of greenways and separated cycle lanes.

Go for the pictures, stay for the history: “A brief history of bike planning in Vancouver, BC.”

Alone with her trolls, Frances Bula wanders into the bike-lane debate yet again:

Does Vancouver really have a new pollution problem as cars idle because of the bleeping bike lanes?

Wanna guess?  And after you’ve seen that data on her blog, would someone please let us know whether there have been reports on the impact of the New Point Grey Road on traffic in the surrounding neighbourhood and on connecting arterials.  (Believe me, if there had been Carmaggedon, you would have known about it – in the headlines, at every all-candidates debate. )

And while we’re stirring the pot, I heard from a reliable source that the Mayor is reported to have said that there will be no more bike lanes now.  Any confirmation?  Could he have been that oblivious?

In an interview with Robertson published on Nov 11 in Vancity Buzz, there was this:

A: Most of the next steps of the bike lanes will be improving the existing network. We’ve got the basic network built now, all the major routes. But there are a number of connections and improvements that are needed to make the system safer and more convenient for people of all ages and abilities. The improvements need to focus on the False Creek bridges, the major bike routes along 10th Avenue and Ontario Streets… because ridership is up so much, we need to make them safer and more convenient and that will be my priority for the next term – to get it ready for the ridership growth to come.

From Business in Vancouver: Transit top of mind for Vancouver businesses as election approaches

… according to a survey released by the Vancouver Board of Trade October 14 … 68% of the respondents picked public transit and infrastructure as the most important issue, followed by real estate development, density and city planning (50%), and community engagement and government transparency (40%).

The Vancouver Board of Trade’s survey respondents had some ideas about how to improve transportation in the region: 49% want transit to be properly funded, but without the burden shifting further to businesses; 46% want traffic to be better managed during construction; and 34% said Vancouver’s existing bike lanes should be removed.

And that’s how you build a coalition.

Ken links to a piece he thinks worth reading from Average Joe: No Lack of Parking on Hornby Street – So Why are Businesses Complaining?

Writer Jeff Lee quoted angry business-owners on Hornby. Mike Brascia of Brascia’s Tailors (at 580 Hornby St) was most vocal of all, complaining that his business was negatively impacted by loss of parking spaces – “Of course I have seen my business decline. Customers can’t park out front.”

That seems like a pretty strange thing to say. Below is Brascia’s Tailors (shop with blue sign on the right). As you can see, it is right next door to a major parking garage (note the empty spots).

I kept an eye on it for a few days. There is parking available there all day, every day. And you can park for a mere $5 per hour – exactly the same price as it would be to park on the street and feed the meter.

… I may just be expecting too much, but surely the journalist should have noticed the giant parking garage and asked Brascia how he could possibly be complaining about lack of parking? After all, the photographer could have reached out his left arm and almost touched the parking garage!