Before we cover the report of the Mobility Pricing Independent Commission, here’s a quick summary of the SFU panel on May 17 that explored congestion charging in Stockholm and London by people who know what they’re talking about.

Ben Plowden, Director of Strategy and Planning from Transport London

The challenge: How to accommodate continued growth without expansion of the road network. London had already accommodated almost two million more people from 2000 to 2015 through increases in walking, cycling and transit, but now they had to consider the impacts of another 10 million trips and significant increases in congestion.

[Ben defined congestion as delay over free-flowing traffic — an almost universal mistake in urban planning. It’s as though car advertising was the model for which we’re designing our cities. No place has ever achieved free-flowing traffic with an expanding population, and no place will. To do so would require the elimination of the city as we know it — a place of exchange — to achieve some physically impossible outcome.]

The goal by 2030: 80 percent of all trips by transit, etc., and a drop in car traffic by three million trips.

In London, air-quality is also an urgent priority, and planners are also trying to anticipate incorporating disruptive technologies that are coming thick and fast.

Central London’s congestion charge came in February 2003, covering only 20 of 1,600 square kilometres in the region.  Business was supportive because they could measure the cost of congestion on deliveries, etc.

There was lots of ‘Megeddoning by the media. But crucially, the system worked from Day One. The negative media coverage disappeared.

One key lesson: Don’t use advanced or experimental technologies until they are well tested.  If there’s a failure at the beginning, it will be very difficult to recover.

New charging increases will be based on air-quality standards, especially for big vehicles, and will extend standards to greater area by 2021.

And then, after you’ve done all that …

Mattias Lundberg, Head of Transportation Planning for the City of Stockholm

Congestion charging came in 2007 — after having been ratified by a close referendum following a trial period — affecting 140,000 trips per day.

The goal: to improve traffic conditions and the environment. Revenues are marked for transit and infrastructure, including roads (notably a major bypass express-way). Transponders have replaced cameras, effectively creating invisible pricing.

There was 20 percent less traffic immediately after introduction — a figure similar to London, and one that has remained stable, even with growth across the region.

That 20 percent had a huge impact on the level of congestion. People could see it; people spent 30-50 percent less time in queues, and experienced less service variability. 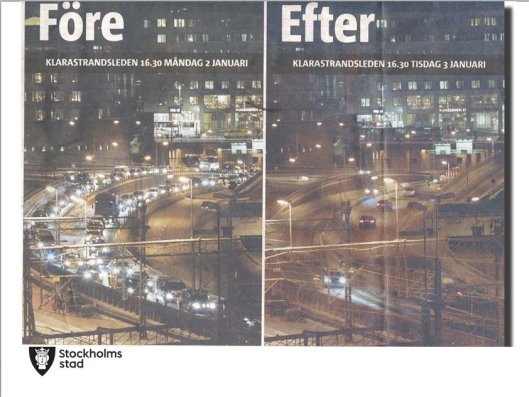 Before and after congestion charge in Stockholm

Although few believed that forecast, it was actually close to the mark.

Adapting to the charge was easier than most believed possible. Many people don’t even know how they adapt when they don’t do the same trip at the same time.  And even a significant increase in transit capacity was not necessary because people found many other ways to adapt.

The panelists were then joined by:

There was tremendous concern about congestion charging, but in the end there were no real negative results. After that, it made it easier to do other more ambitious projects.

The price tag for congestion was clear: the deadweight cost to business.

Don’t rely on technology that might not work on the first day.

It’s important to have additional transit capacity for acceptance even if the need is not that significant because there are many other ways to adapt.

Because equity is such a great concern, we need to define the questions and get the data on who is travelling, when and how. The number of low-income people in Seattle commuting by car into the city centre is a very low; they do better by getting better transit service.

In Stockholm, there no discussion on equity after the system was introduced.

(Most likely it won’t be low-income people who are aggrieved but the middle-class drivers who will feel the effects.)

Provide clear objectives people understand. Then design a scheme that works for that.

Develop a story that describes what works for your community, and recognize that mobility pricing is only one of the tools — a very large hammer when other smaller, less intrusive tools are possible. You need to use them all.

Each city will do it in its own way. The first question is: what does your city want to be like? Then how will new technologies get you there?

People need to understand the system being used — which means a point-based system using bridges, for instance, might be a better choice than a fairer but confusing distance-based charge. Point systems are also easier to enforce as well as understand.

You want a good scheme, not perfect scheme. That’s too complicated.  Be wary of starry-eyed innovators.

In London, customer satisfaction for with the operations of the system is over 80 per cent — one the best measures of all the services offered by local government.

Bottom line: You may have to go around a few times to get over the rejection of mobility pricing.

1 thought on “Mobility Pricing in Other Places: Lessons Learned”