Ian: So much for us not having ride-sharing in B.C.   But in many ways, this suggests the pitfalls of any ‘sharing’ company: no regulation which mandates any form of equity. 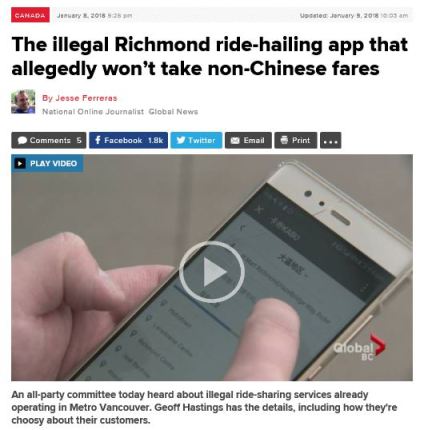 On Monday, as the provincial government discussed the future of ride-hailing in British Columbia, seven illegal ride-hailing services were already up and running around the province.

Five of them were operating in Richmond alone, according to the BC Taxi Association. …

An Audi A4 eventually arrived to pick up its fare. But the driver wouldn’t take this one.

“The driver said the company running the app asked them not to take any Westerners, or, say, non-Chinese riders,” Qi explained.

The City of Richmond is aware that these services are operating in the Vancouver suburb.

“There’s no legal framework under which they would operate,” he said.

Price Tags: Representatives, spokespeople and citizens, whether from the business community, Richmond, the Chinese community or the Province, need to get a hold of this issue – whether the transportation and regulatory implications, or the emergence of services which discriminate on the basis of ethnicity.  This kind of thing can be, in the wrong circumstances, explosive.

2 thoughts on “Item from Ian: Race and Ride-hailing”