Price Tag readers made some very good comments about how New York City’s High Line is markedly different from Vancouver’s Georgia Viaducts which are scheduled for demolition if the funding can be found. The High Line was an unused railway between a few kilometers of warehouse buildings. But a better parallel is the newly opened Seoul Skygarden which is built on a former motordom “flyover” that connected several locations with the railway station.

Built at a cost of  roughly 65 million Canadian dollars, the bridge took two years to be redesigned by the Dutch architects Mts MVRDV. As written by pfsk.com it was designed to  give “qualities of walkability, neighbourliness, human scale and shared enjoyment of its places…The Skygarden isn’t the first project designed to revive Seoul; the Cheonggyecheon stream was opened in 2005.” 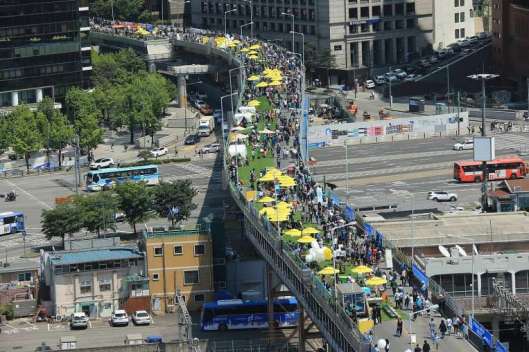 Called the “Seoul-lo 7017 after the age of the original construction, the Skygarden “ is both a symbol and an instrument of the shift from car to foot. The original concrete structure has been strengthened, and lifts, stairs and escalators have been added where necessary to connect it to the ground. Bridges also connect to adjoining commercial buildings, who have to pay for the uplift in value. Other uses – cafes, performance spaces, a market – are scattered across the site.”

The overpass was planted with a “library of 24,000 plants, all native to Korea and arranged in the order of the Korean alphabet. Once plants mature, they will be sold and replaced, making the library also a nursery according to Winy Maas of the Dutch group MVRDV.

“Young Joon Kim, the current city architect who also worked as the coordinator of the Skygarden project, says that he is “very happy”. He acknowledges that not everyone is pleased about handing over road infrastructure to pedestrians – drivers of cars and commercial vehicles, for example – but says that “when you look at things over a longer period it’s clear that citizens have to have car-free zones. It’s not a kind of taste, it’s the way to go, like many other cities.”

4 thoughts on “Seoul’s Skygarden, a Portent for the Georgia Viaducts?”