End of the World As We Know It

In one of those absolutely classic motordom moments, the Oregon Department of Transportation  is already warning vehicle drivers to “be prepared to be stuck in their cars for hours during the solar eclipse.”  The Portland Oregon area will see almost 99 per cent of the eclipse commencing at 9:00 a.m. on Monday August 21.

On that Monday the “biggest traffic event in Oregon history” will occur with  “State emergency management officials (are) estimating one million people from out of state are coming to Oregon to watch the eclipse. More rental cars and RVs will be added to our highways, not to mention rural single-lane roads to and from campsites.”

Yes. It is Carmeggedon. “One of the things that we’re doing is tracking rumors, and we’re hearing a rumor on Twitter that a lot of people from Seattle are going to be coming down very, very early on Monday morning of the eclipse and that’s going to complicate the morning commute in the city of Portland.”

The good folks at Oregon Department of Transportation looked for a comparable, and came up with the traffic gridlock  resulting from the January 2017 snowstorm, when “People left work early when flakes started to fall, only to sit in gridlock for hours, running out of gas.”

Overloaded cell service may mean paper road maps will be needed. There is also a concern that drivers will stop their cars to look at the eclipse. Just as in Medieval Times  when it was thought an eclipse would mean the end of a king, it’s probably a good thing not to be driving a vehicle, especially in Oregon. 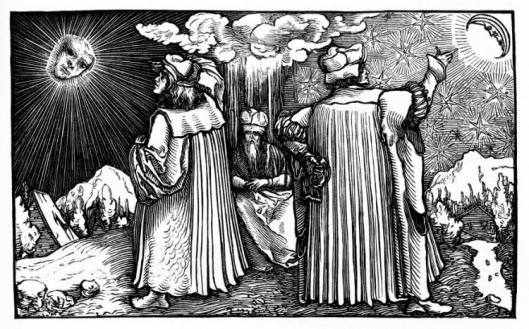 1 thought on “Worrying About the Eclipse and Cars!”