Something to mull over as the green slime of winter cloaks the Main Street Poodle. 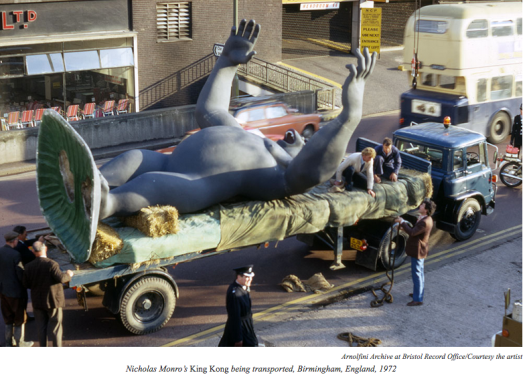 This is excerpted from the New York Review of Books blog – a post by Jon Day.

‘In 1972, sixteen artists were each given £1000 to produce a site-specific sculpture, to be installed in one of eight cities across England and Wales. The City Sculpture Project, which is documented in an exhibition at the Henry Moore Institute in Leeds, England (on view through February 19), was intended to rejuvenate public sculpture in Britain. The project sought to move sculpture out of the garden and gallery and place it on the streets of living cities, to confront the people where they lived. The people weren’t immediately convinced….

‘…One of the few original works to survive the intervening years (most have been lost or destroyed—the exhibition at the Henry Moore Institute consists mainly of plans, photographs, and maquettes) is Nicholas Monro’s equally blatant King Kong, a huge fiberglass gorilla originally installed outside the Bull Ring, a Brutalist shopping center in Birmingham. It now stands—face grimacing, arms stretched in welcome—outside the Henry Moore Institute. Like Kimme, Monro thought obviousness was what the people wanted. “In this case they will like him won’t they?” he said at the time. “Because they can understand it and appreciate it. He’s a giant gorilla.”…

‘…The loss of most of the original City Sculpture commissions is a shame, as the exhibition doesn’t really convey what must have been their real point: their unsettling, provoking, or glorious real-world presence. Nor do we get much of a sense of how they interacted with their environments, what it might have been like to walk close to them, to touch them, or to climb them. Many of the sculptures were located in modern, redeveloped areas: Kenneth Martin’s Sheffield Construction, 1972, a rigid tower of nineteen blue boxes, stood alongside a concrete flyover in Sheffield; Robert Carruthers’s Timber Framed Complex, a series of wooden constructions which was part stylized pagoda, part children’s playground, peeped out from the middle of a traffic intersection in Colmore Circus in Birmingham. Many of these were works designed to sit alongside—indeed to draw attention to or contrast with—Britain’s equally contentious post-war architecture. ‘

6 thoughts on ““The Problem of Public Sculpture” 45 years later”