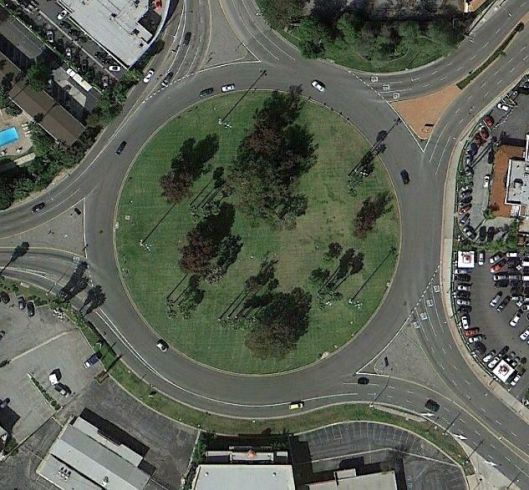 It is the French  as reported in The Economist that in the early 1900’s came out with the carrefour giratoire, the precursor to the modern traffic circle. When installed in Paris, traffic circles require circulating traffic in the traffic circle to give way or priority to car traffic coming from the right.

If you have driven in France in the last ten years, you will have seen a proliferation of traffic circles, with estimates of 30,000 existing and a further 500 annually installed. Why? Because of road safety. The graph below shows the USA with the greatest number of road fatalities and the smallest amount of roundabouts. 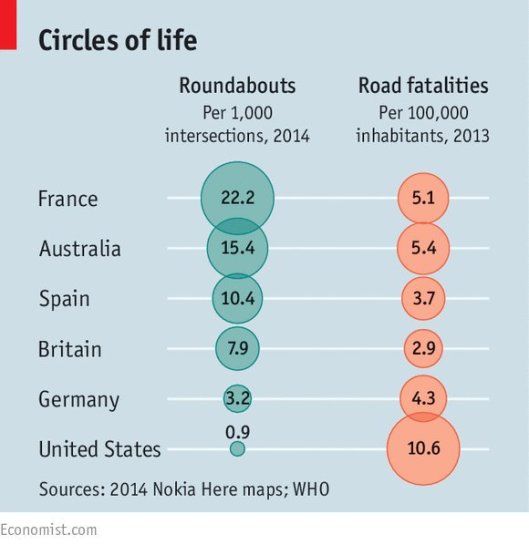 As the Economist article states, In America, for instance, which has a mere 4,800 roundabouts, a quarter of all road deaths take place at intersections. America’s Federal Highway Administration, which helpfully supplies a “roundabouts outreach and education toolbox” to overcome public distrust, says that they reduce deaths or serious injuries by around 80%, compared with stop signs or traffic lights”

There are some challenges with traffic circles, especially in the safe and efficient design for pedestrians to cross at well delineated places. Traffic circles also require a lot of land when there are two or three lanes of traffic in the circle.  They do however lend themselves to great art installations and plantings, and these have multiplied in France with the rise of local authority spending. In addition, the traffic circle has become worthy of architectural analysis:

“The roundabout has accompanied the development of the fluid society,” suggests Laurent Devisme, of the National Architecture School in Nantes. Like modern life, it requires “judgment, anticipation and commitment”.

Perhaps the traffic circle is one of the  last hurrahs of motordom, celebrated as a place people go through and to but never linger in. Could improved intersection design, greater visibility, and slower vehicular speeds accomplish the same and allow for better walkability and livability?

9 thoughts on “Are Traffic Circles Safer?”