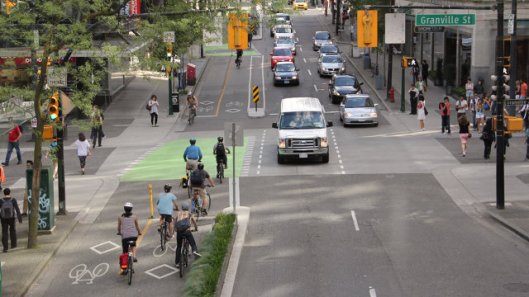 Price Tag editor Ken Ohrn  is one of the founders of HUB, the coalition of concerned cyclists across Metro Vancouver. We were talking about the remarkable story of cycling in Metro Vancouver, and the fact that within one decade HUB and its predecessor the Vancouver Area Cycling Coalition (VACC) have solidly put cycling on the urban agenda, and worked tirelessly for seamless, safe and separated cycling connections across the region.

The case has been made for the economic benefits of cycling and cycling lanes. Studies undertaken in Toronto and New York City commercial areas  clearly show that people traveling by walking, cycling, and transit spend more per month and visit more often than those people traveling by cars.  My TEDX talk  references studies in Toronto and New York City which clearly show that supporting active transportation augments shops and services’ bottom line.

For those people who are in cars, bike lanes are good too-the protected lanes in New York City actually allow car traffic to go faster through the city.  This report from the New York City’s Department of Transportation written in 2014 shows that bike lanes allow vehicular traffic to flow faster, and that pedestrian injuries decrease by 22 per cent on streets with bike lanes. Cycling injuries have gone down by as much as 65 per cent on previously troublesome streets.

Why do cars flow faster?  “Cars turning left now have pockets to wait in-so they’re less likely to hit a cyclist riding straight, but they also stop blocking traffic as they wait”. The result is better visibility for the motorist and the cyclist, and helps the traffic flow.

It’s worth taking a look at the NYC Department of Transportation link to see how the data is collected and interpreted. As past commissioner Janette Sadik-Khan said in her talk in Vancouver earlier this year “In God we trust, but everyone else bring data“.

New York City’s data shows us the way forward. One separated bike lane at a time.