From the leader of New Urbanism (in Atlantic Cities):

Andrés Duany, the cigar-chomping, Cuban-born architect who was a founding member of CNU, with yet another addition to the planning lexicon: lean urbanism.

The lean urbanism concept, he says, is like a software patch, or a workaround – ultimately a guide or a tip sheet to navigate the complicated, and often very expensive, maze of working in the built environment … 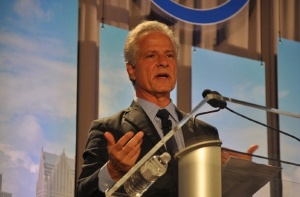 “Infrastructure has become so gold-plated and extraordinarily expensive,” Duany says. “Now, they will say the rules are necessary to protect health and safety. But we’re going to do the empirical studies to show that’s not the case.

“Take the electrical code. Most of us are living with the old electrical code, and we’re just fine. Electrical wires run in tubes, originally 30 amps, then 60 amps. You could pull it through the same tubes. Now it’s 120 amps, and the wires don’t fit in the tubes anymore. If you have an apartment or an apartment building and you want to renovate, you have to rip up everything. How many are being burned alive under the old code? Nobody. The rationale is to require things that are gold-plated. And the people who show up at the hearings are the electricians.”

Duany describes lean urbanism as “not a philosophical approach, but a narrow seam of activity, a sharing of secret knowledge.” Tactical urbanism – the unsanctioned demonstration projects of creating a parklet or “chair bombing” a street – might be thought of as at one end of this spectrum. Groups like CNU, the American Planning Association, the Urban Land Institute and SmartGrowth America are operating at a higher political level, pushing policy reform. Lean urbanism, as Duany defines it, seeks to occupy the space between, helping guide urban development in a more practical manner.