PART 2 of the extended essay by a guest writer, Peter Marriott, on the question of transit on Robson Street.  Part 1 is here.

Beyond Robson: Connections and Alternatives

The problem is summed up with a simple observation: the Robson line doesn’t just serve Robson! A transit line in a connective transit network serves a market far beyond just the areas that individual line travels through. The #5 isn’t just taking people from the West End to Downtown; through connections, it’s taking them all over the city, to major destinations like Central Broadway and beyond to the region. 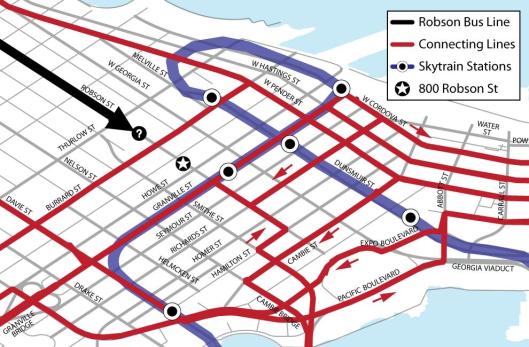 The map above is a (simplified) schematic of the key parts of the transit network that the Robson line interacts with. The question is how to make this interaction as seamless as possible.

It’s impossible for a single transit line to efficiently serve every destination that its passengers might be travelling toward. This is why, if we want transit that effectively and efficiently attracts riders, connections are essential, and the optimum network structure is a grid. The most significant impact of closing Robson Square is that the Robson Line no longer connects with the Canada Line nor with the abundance of frequent surface transit lines that run on Granville. Connections with these services, which serve trips to South Granville, Central Broadway, the Cambie Corridor, the Airport, Richmond and beyond, will now have a 300‑metre gap, or 10 minutes of out‑of‑direction travel for every trip:

Can this problem be solved? The City’s survey about closing Robson Street, unfortunately, offers only this rather disingenuous message about transit (click to enlarge):

The message from the City, just like the VPSN and other groups, is: “don’t worry about transit, because the route will be changed.” Again, “thoughtful planning” will resolve everything.  But, of course, no routing options are actually shown in the City’s survey.

In fact, the only realistic “short‑term re‑rerouting improvement” that’s possible with Robson Square closed to transit is a minor modification to the trolley wire to replace the loop around Thurlow, Haro and Smithe with a left turn directly onto Burrard from Robson: 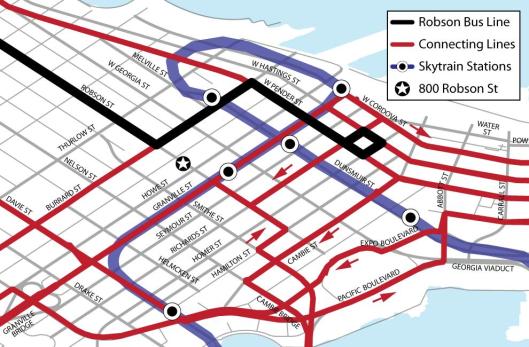 The astute observer will note that, despite the City’s text, this route does not serve the library, nor shopping on Granville Street, nor theatres. And the gap remains, with poor connections between Robson and Granville.

In the longer term, there isn’t a feasible better alternative. Georgia Street is so congested that the suburban buses that operate on it are slow, unreliable and routinely detoured onto Pender, and there would be safety and operational concerns with frequent turning movements at Burrard and Georgia.

The only other options are one‑way streets that would be no improvement over the current Pender detour. Moreover, any of these new routes would require a significant expenditure on new trolley wires—not to mention time for planning and engineering the route change.

Closing a street to private vehicles is a fundamentally different question from closing a street to transit, and it’s unfortunate that the two questions are being conflated here. Buses, especially trolley buses, can’t just go onto “some other street” at a whim. Transit, uniquely among transportation modes, requires efficient, legible and direct connections, because many trips aren’t made on a single vehicle. Again, this is a geometrical problem.

Here’s the bottom line: closing Robson Square to transit means perpetuating the current route, with only a minor improvement, and it means perpetuating poor transit connections between Robson Street and the rest of the transit network. That is the fundamental tradeoff here and, even if the street ends up being closed to transit, that tradeoff needs to be acknowledged and reckoned with.