An occasional update on items from the Velo-city.

Here’s an interesting method to build the needed support: pop-up cycling infrastructure. This exercise in tactical urbanism was recently undertaken by a group of graduate students in Cleveland, Ohio. For one week, a downtown street was converted to a two-way cycle track — the first ever on Cleveland streets.

This second installment deals with the chapter (#10) in the book on “women and cycling,” which was written by my three brilliant colleagues, Jan Garrard, Susan Handy, and Jennifer Dill, the world’s leading experts on this topic.

Over the weekend a hardened set of contenders pedaled 30 miles across Portland, each loaded down with a hundred pounds of food, propane, and tents. This isn’t the new Ironman challenge. It’s the Cargo Bike Disaster Trials. …

Carmen Merlo “We saw a much larger potential for the use of these bikes.  During a large-scale event, or even an event such as a fuel shortage, you want to use sustainable practices that don’t rely on fuel to get around, that can be open, even when larger emergency vehicles can’t get through.”

So her department agreed to sponsor the disaster trial. And staff are identifying parts of town that might be harder to serve in a disaster. They’re working with cargo bikers to set up volunteer delivery routes for emergency supplies. 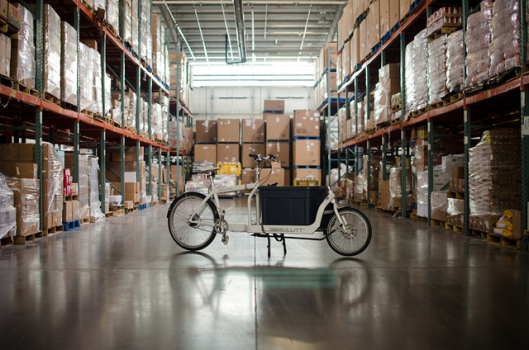 BLAST FROM THE PAST

I had a request the other day from someone (sorry, lost your email) for any pics I had of the Burrard Bridge bike-lane experiment of 1995.  And fortunately, I found one: 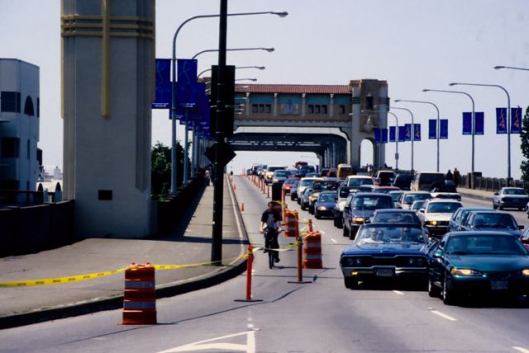 A little premature, that experiment – but at least it didn’t stop progress on the bikeway network, which eventually increased demand sufficient to justify another trial in 2010.  That one took place on both sides of the bridge, was better prepared for and had strong commitment from both the politicians and the engineers.

But the final design is still not approved, and no doubt the culture-war aspect of cycling will still bring warriors to the field.