We’ll have to go to Toronto to find out: in this case, SpacingToronto, which is running excerpts from Taras Grescoe’s new book, Straphanger.

The book examines the success stories, challenges, and future hurdles of 14 transit systems from across the world, including Toronto, Montreal, and Vancouver. 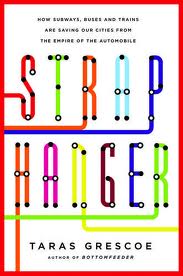 There are lessons to be learned from the transit-led renaissance taking place in Portland and Vancouver. Portland is taking things slow — too slow for some tastes. Building denser, transit-oriented suburbs like Orenco Station as a means of transforming the North American cityscape may be a case of too little, too late, particularly in recessionary times. Vancouver, for its part, is undergoing a rapid transformation commensurate with its transit system of choice, the SkyTrain. As a widely applicable model, however, Vancouver may have priced itself out of the market: not only is its wealth of planning expertise simply not available to most cities, there are few places these days that can afford to buy themselves an expensive SkyTrain. A better path, I suspect, lies somewhere between Portland’s New Suburbanism and Vancouver’s Hyperurbanism.

In other words, in re-imagining and rebuilding the kind of cities many of us already live in.

And don’t forget, Taras will be in conversation with Charles Montgomery at the Central Library on the evening of Monday, May 7 – 7 pm in the Alice Mackay Room.