THE DECLINE OF CAR-POOLING …

Philip Langdon reports: “The percentage of workers who car-pool to and from their jobs has fallen almost by half since 1980 … ”

It would be interesting to know whether some of the people who used to car-pool have switched to mass transit. In Washington and elsewhere, rail transit has grown dramatically since 1980. It offers an enjoyable alternative to sharing a car ride with three other people. Some commuters prefer taking the train, where there’s often more freedom to retreat into one’s own world.

In Vancouver’s case, the most dramatic drop in car-pooling took place at UBC, with the arrival ofthe B-line rapid bus service and introduction of U-Pass.  In effect, TransLink created a super-frequent carpool.

Had employment growth over the past three decades been concentrated in dense places instead of scattered across the landscape, today there might be even more people traveling to work via mass transit (or foot or bicycle) — and fewer people in automobiles.

But, of course, we didn’t.  And here in Metro Vancouver, with the commitment to Gateway – widening highways and arterials, building more bridges – there will be a huge incentive to choose more dispersed development than ever.  No matter how much commitment is made in rhetoric and plans to compact, transit-oriented growth, the reality on the ground is to the reverse.

… AND THE DECLINE OF THE PARKING-LOT BOOTH 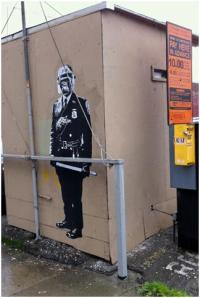 There’s something poignant about parking lot booths. They’re a dying piece of the urban landscape. There’s really no reason any longer for parking lots to have human concierges.  …

And the lots themselves are mostly doomed. They need to be in places where people want to go – to shop or eat or visit. But nobody wants to just go to a parking lot. So the popularity of their neighbors creates the pressure to get rid of them. One by one they disappear and with them their booths.

In America at least, urban roads are safer than rural roads  – way more in Washington, D.C. than in Wyoming, at the extremes.