My current Business in Vancouver column:

Why B.C. needs to exploit more of its Australian connections

All things considered, Aussies have it the best.

Big country, small population. And like Canada, resource rich. With much better weather.

Like Canadians, Australians are predominantly an urban people, occupying some of the world’s most livable and prosperous cities. Yet both countries are experiencing the same dynamic: intensifying urban cores and accelerating suburban sprawl.

While each major Australian city has its own special character, Brisbane is the only Anglo-rooted subtropical city in the world. Like Vancouver, it has a regional population of about two million. And like Vancouver, it transformed itself with a world’s fair. Two years after our Expo 86, Brisbane held one too, and shortly afterward redeveloped its site. 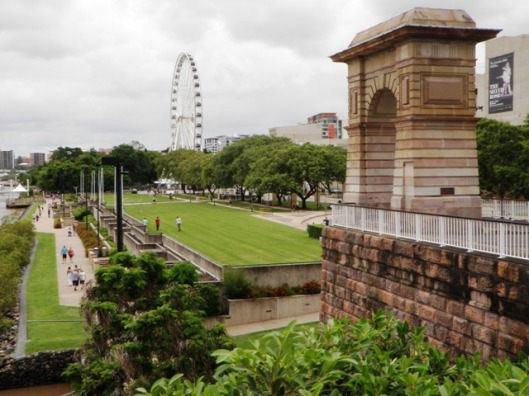 But it did a better job, partly because the state government funded big culture: museums, libraries, galleries and convention halls. Complemented with a luxurious landscape, Brisbane’s South Bank may be the world’s best example of a transformed world’s fair site.

which are other leading examples of urban experimentation. The Kelvin Grove Urban Village, a joint initiative of a local university and the state, is synergistic planning for creative industries. Fortitude Valley and adjacent suburbs are an urbanist’s delight. Downtown has the best open-air mall in Australia.

However, beyond the five-kilometre ring, Brisbane sprawls – “open slather” as the Aussies so expressively label it. Without the right-angle grids that make cities like Vancouver so simple to grasp, driving can be a challenge. And so can the congestion – something that politicians try to address by promising more roads and tunnels.

a distance sufficient to take a Vancouver driver from Lost Lagoon to Main and Broadway. At a cost of well over $3 billion, it’s only one element in a scheme that includes an even longer tunnel to the airport, along with bridges and bypasses that make up the largest road project in Australia. Financed as a public-private partnership to be paid for by tolls, there’s no doubt that if Clem7 works, it will be pointed to by enthusiasts as a model for Vancouver.

But there are some early warnings.

For the first weeks, when the tunnel was free, about 60,000 drivers a day took advantage of the opportunity to try it out. The week after tolls were instituted, even at a discount, the number dropped to just over 20,000. The planners had assumed an average of 100,000 toll-paying drivers a day – but it’s still too early to say how it will work out.

The Clem7 represents the trade-offs that face fast-growing, car-dominant cities on both sides of the Pacific. On one hand, most civic leaders subscribe to a “balanced” transportation system. In reality that means never inconveniencing the car. Brisbane, for instance, was unwilling to reallocate road space on the surface for other users even as it built more of it below ground. Politicians promised, as they do here, that there would always be a free alternative to any toll road or bridge.

They didn’t take into account the impact of low-cost GPS units. With the push of a button, cost-conscious drivers can be directed around the toll road, which, given the eased congestion on the free roads, adds to the incentive. Until they fill up again. Which defeats the purpose of the tunnel.

On the other hand, Brisbane is spending millions on new facilities for cyclists and pedestrians. 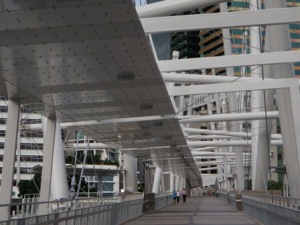 The newly opened Kurilpa Bridge, at nearly $60 million, is just one element of an aggressive statewide bike plan budgeted at a half billion Australian dollars over the next 20 years.

What Brisbane is doing is more relevant to Vancouver than most of what is happening elsewhere on our continent.

A few weeks ago, the Queensland Premier Anna Bligh was briefly in Vancouver to sign an agreement between one of Brisbane’s major universities, Griffiths, and Simon Fraser. She met with our premier, and no doubt, on her run around the seawall, had a chance to assess our urban dynamic.

It’s time we did a little run over to Queensland to learn from them. Because we have so much in common, a study of what we do differently is all the more rewarding. •

9 thoughts on “The Australian Connection”